Today's digital age no doubt comes with a ton of perks: Ever since the onslaught of the internet and smartphones, much of the world has been able to access an unprecedented wealth of information within seconds. People no longer have to leave home to shop, fumble with paper maps while driving, or scrounge filing cabinets for documents.

But our age of endless information also comes with serious concern for many. In recent years, technology has been used to inform political campaigns and meddle with major elections in the United States or to harvest contact information for fraud and hack personal cellphones in the U.K. The impact of tech-related crime is far-reaching, and Australia has been no stranger to this problem, either: More than 10 million Aussies have fallen victim to privacy breaches in 2019 alone.

Even so, are people across the Western world really that concerned?

Edith Cowan University have been the pioneers in cyber security, with over 10 years’ experience offering cyber courses such as the Master of Cyber Security.

We surveyed 1,130 people from Europe, the United States, and Australia to see how safe people feel in their highly wired lives and what they're doing to keep themselves safe. Our comprehensive survey spans several demographics, from Gen Zers to baby boomers, to see whether people are staying alert in an increasingly scandal-ridden cyberspace. Ultimately, it offers a valuable glimpse into the state of security today and in the near future, especially as new technological trends continue to explode and develop. Read on to learn more about public sentiment surrounding cybersecurity – and to see where you stand.

The hazards of hacking

Hack attacks can affect anyone, anytime, and they cumulatively yield potentially trillions of dollars in damages worldwide. In Australia alone, hacks against small businesses are on the rise, and there is much public discussion about how the country's current cybersecurity infrastructure may be falling short.

As one cybersecurity expert put it in wake of Facebook's groundbreaking 2018 Cambridge Analytica scandal, "A lot of the danger here is in how little we actually know about what's going on" which points to the risks in future uses for our stolen or misused data.

However, our survey suggests that only a small minority of tech users actually worry about being hacked. About 25% of Americans voiced concern about the possibility, compared to 26% of Australians and 29% of Europeans participating in our survey. Nevertheless, 70% of respondents still said they believe data privacy is important, and they do believe their devices could be hacked. Roughly 90% of survey respondents said they believe it's possible their personal computer or smartphone could be hacked in the future, while far fewer were worried about devices like virtual assistants, smart watches, smart TVs or other high-tech home appliances.

Among social media platforms, Facebook and Instagram were perceived to be the most dangerous, with 68% of respondents believing their personal data on Facebook to be particularly at risk. Tech users were far less concerned about the risk associated with data in their email accounts, online health portals, or online banking platforms.

The U.S. Cybersecurity & Infrastructure Security Agency has issued a long list of security recommendations for everyday tech users, while the Australian government has an archive of advice on the Australian Cyber Security Centre website. It's clear that major world powers are concerned about what could be done with everyday people's private information –but what are everyday tech users actually doing to keep themselves safe? 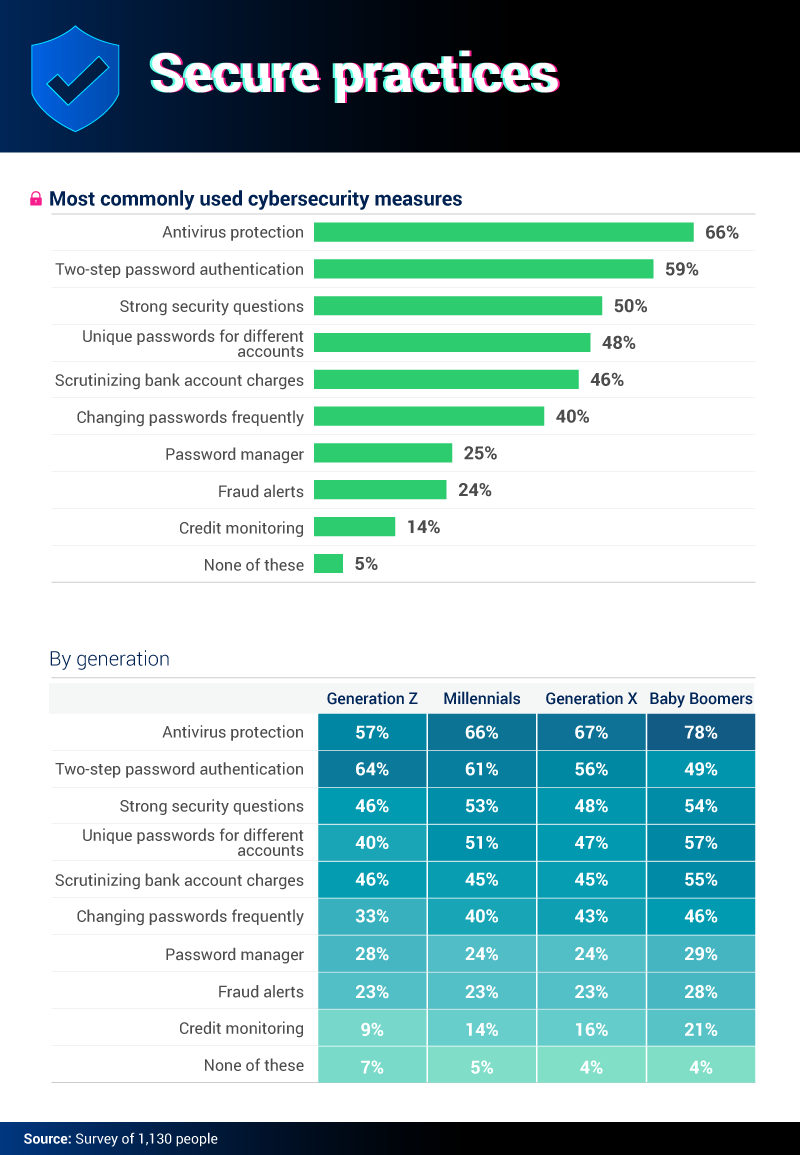 We asked survey participants what measures they've taken to protect themselves from hacking. By far, the most common were using antivirus protection software (66%), two-step password authentication (59%), setting up strong security questions (50%), and using unique passwords for different accounts (48%). Even so, less than half of survey respondents said they change their passwords frequently – about 40% said they do – and less than a quarter set up fraud alerts to let them know about potential dangers.

Generationally speaking, baby boomers were the most likely to use antivirus protection software (78% of all respondents). The youngest tech users – Generation Z respondents – were the least likely, at 57%. Instead, they tended to use two-step password authentication the most, although only 64% of Gen Z users have done so.

Interestingly, though the elderly are most at risk for cybercrime, the youngest tech users – Generation Z and millennials – tended to have the lowest penetration rates for most of the anti-hacking measures discussed in our survey.

State-sponsored cyberattacks are a growing trend in recent years. Since 2005, more than 102 individual cyber operations are believed to be sponsored by the Chinese government, along with 71 attacks from Russia, 26 from Iran, 23 from North Korea, and six from the United States. But with hackers, one of the biggest challenges is attribution: identifying the source of a cyber attack, the complexity of which is strongly conveyed in actions such as the United States rewarding $5 million to those able to identify hackers from North Korea. 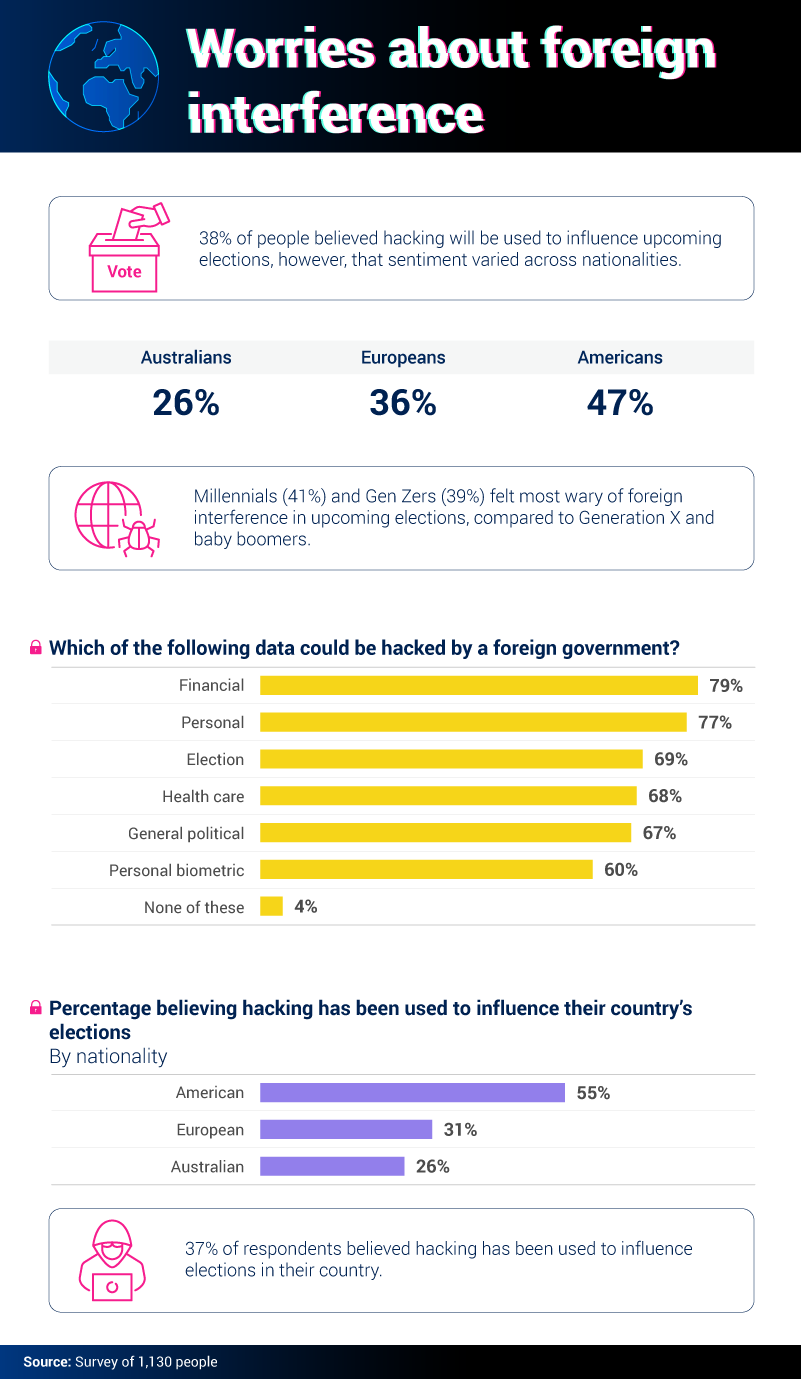 Most infamously, there was Russia's involvement with the 2016 U.S. presidential election – but have events like these really made an impact on tech consumers?

According to our survey, 38% of participants believed hacking will be used to influence upcoming elections, but variations largely depended on each participant's nationality. Nearly half of all Americans surveyed – 47% – believed hacking will affect their elections, compared to 36% of Europeans and 26% of Australians. Millennials and Generation Z respondents were most suspicious of foreign interference with their vote, and survey participants overall thought that financial and personal data were most at risk of being hacked and mined by foreign governments. Health care data, election data, and biometrics were also points of concern, with at least 60% of all respondents saying they're concerned about these areas being affected by hacks.

Given the widespread prevalence of hacking and other cyberattacks, many are looking to the government for solutions. While much of Europe has adopted GDPR guidelines to protect individuals' data rights and privacy, the rapid evolution of technology in general leaves room for improvement and growth. 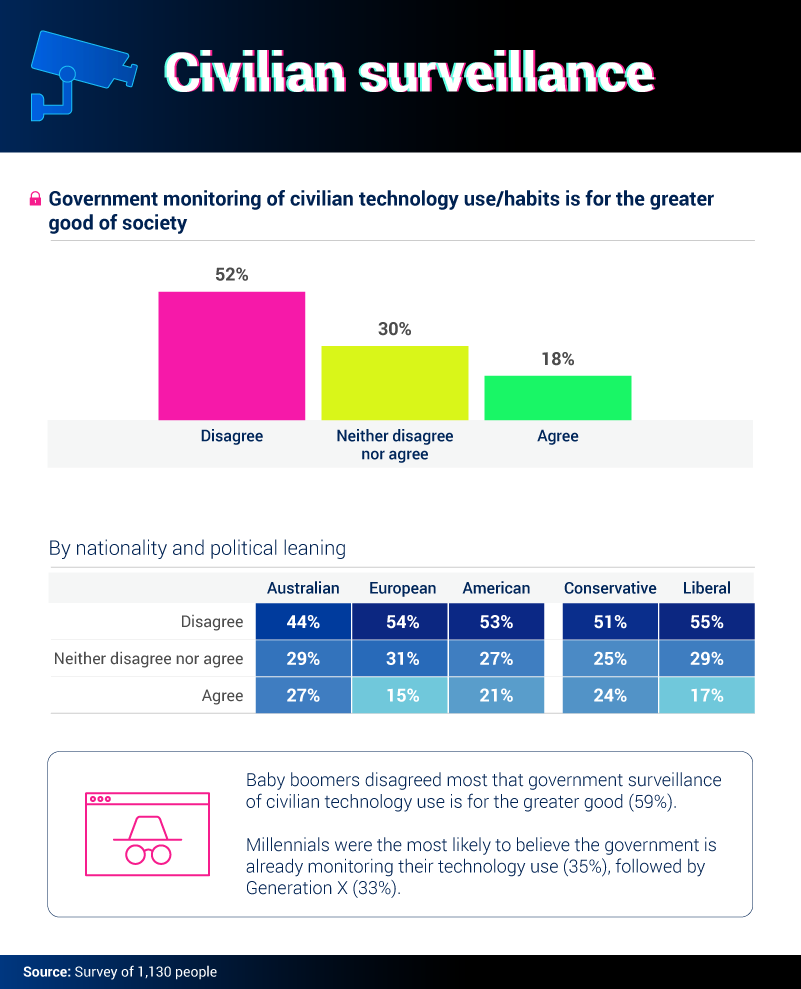 Baby boomers were the most strongly opposed to government monitoring. However, about a third or more of those who grew up in the digital age – particularly Generation Z and millennial respondents – already believed that the government is watching what they do with their devices.

Cybersecurity in the future

Cyberattacks are a massive problem around the world, and journalists and think tanks unfortunately project that the problem will get much worse. During the COVID-19 novel coronavirus outbreak alone, experts have already seen a 667% increase in spear phishing email attacks, and average spending on cybersecurity is expected to increase in the corporate world.

Our survey is an audit on how Europeans, Australians, and Americans may be thinking about the growing cybersecurity issue and what they can actually do about it. Our results suggest that many believe hacking or breaches could happen to them, but few are actually worried about it. Still, many are taking steps to protect themselves, however small, and few believe in government interference.

Certainly, there are points of optimism in the caution and awareness that tech users have shown. But there are also significant points of vulnerability as there were over 4 billion records breached in the first six months of 2019 alone.

Survey data has certain limitations due to self-reporting including telescoping, exaggeration, and selective memory. We neither weighted our data nor statistically tested our hypotheses, so our findings should be considered exploratory.

If you found the analysis of hacking worries and data security helpful, we encourage you to share our project and the repurposing of these graphics or findings for any noncommercial use. Simply include a link back to this page so your readers have access to the full report and methodology.